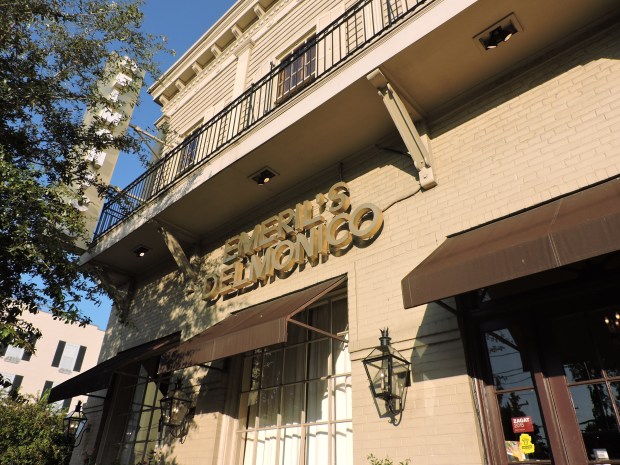 This is one of those place we would probably not patronize were it not for happy hour. Everyone knows Emeril Lagasse. You know you’re getting quality here – and paying for it. Hence – happy hour. Located near Lee Circle on St. Charles, it’s easily accessible by streetcar. The interior is just as beautiful as the restored exterior. Once again, we were greeted by a friendly hostess. If an establishment can’t get this right, everything else is suspect. As it was only 5:00 P.M., the restaurant was virtually empty. We generally gravitate towards the bar as opposed to a table. We’re just more comfortable there, and we – and by we, I mean Nancy –  do enjoy engaging the bartender.

It’s a small bar with only six seats. Considering the layout of the rest of the place, it’s understandable that most people will sit at a table.The grand piano only adds to the gravitas. The bartender  – whom we later came to know as Markos – poured us some water and handed us menus. As for the atmosphere, the volume level of the music was perfect, which was traditional blues, including legends like Howlin’ Wolf and Muddy Waters. The interior was unassuming beige and other muted neutral colors.

While they have a fairly extensive beer selection, there was nothing on tap. As for the wine, we don’t claim to be well-versed enough to make an objective critique. Suffice it to say, it’s safe to assume this place will satisfy the most discerning of wine consumers. Ultimately, we decided on mixed drinks. Having come to appreciate a fine Sazerac, I decided to try my luck here. It was better than most I’ve had in town. Some bartenders make it too boozy or too sweet. Markos got it right. Nancy enjoyed a Pimm’s Cup for the first round, and one of the specialty cocktails for the second. It was called a “Rice, Rice, B.B.”, which consisted of Oryza vodka, blueberries, basil, and lemon. She enjoyed it as much as I enjoyed the Sazerac. For the record, happy hour prices on drinks include half off all beer, wine by the glass, and mixed drinks.

The primary draw for this happy hour was the fifty cent char-grilled oysters. Most places generally offer deals on raw only, so we couldn’t pass up this opportunity. The oysters were char-grilled in lemon butter, light on the cheese. Unfortunately there was no bread for sopping, which is crucial. It’s worth mentioning that the oysters come with complimentary candied bacon. Your tolerance for sweetness will determine how you feel about this. But after a couple drinks, the smell of the bacon is dangerously intoxicating. Rounding out the happy hour menu were five dollar small plates. We decided on fried eggplant, house-made sausage, and deviled eggs. The eggplant was either not ripe or undercooked. The breading, however, was fried to crispy deliciousness. The side of mayonnaise was a refreshing change from the standard marinara. The sausage was authentic, spicy Italian sausage, with a surprising side of honey mustard and pickled vegetables. Very unique take on an Italian staple. Simply put – delightful. The deviled eggs were dressed with shrimp and mixed with andouille. I was mildly impressed, but wouldn’t pay five dollars for three deviled eggs again. Nancy’s take – “They’re deviled eggs…” 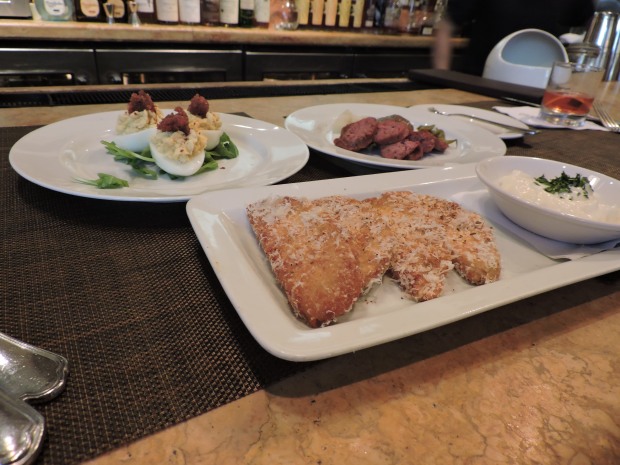 Small plates. Some smaller than others.

Overall, we certainly enjoyed the drinks, and will return for the Sazerac and other specialty cocktails. As we mentioned in the introductory post, the main goal of going to happy hour is frankly – dinner. After the oysters and small plates, we realized we were still hungry, so we hit up another happy hour – to be reviewed later. Oddly enough, we encountered another patron from Delmonico at happy hour number two. Nancy intended to connect with her, but she slammed her campy cocktail and cheap eats before taking off. Probably a booze hound, but what does that say about us?

The damage. Who pays?